on the end of its peninsula is located in the middle of Lake Garda, surrounded by the walls of the Medieval Castle it offers to visitors a historical center completely pedestrian that important figures of the past have praised.

Sirmione Old Town: most famous places are Catullo Caves, Sirmione Castle, Terme di Sirmione, Aquaria, the Romanesque church of San Pietro in Mavino, the church of St. Anne, the church of Santa Maria Maggiore, the palace of Maria Callas and many romantic spots.

What to visit in Sirmione old town:

The historical center is located on an island that is accessed by the drawbridge  of the castle that surrounds it, past the old town, once a fishing village, you see Terme di Sirmione on the left then, going ahead there is the hill of Villa Cortine, later you find the Romanesque church of San Pietro in Mavino and ends at the tip with a spectacular panoramic view of Lake Garda at Grotte di Catullo. Hotel La Paul is about seven hundred meters, in perfect position to visit Sirmione center.

The Sirmione Scala Castle, enlarged and fortified by Mastino I of Scala family for naval control on lower Garda, is still in excellent condition, perhaps the only one still intact with the dock and the drawbridge; inside is housed a museum.

Catullo Caves, the most impressive archaeological site of the Roman villa in northern Italy, dating from the first century B.C and the first century A.C , enjoy a spectacular panoramic view of Lake Garda, there are the remains of the basement and the ground floor, you reach it crossing the old town and going ahead till the end of the peninsula …… read more

At the entrance of the Castle there is the little church of St. Anne built in XV sec. for soldiers of the castle, it draws attention to the position and the size; inside you can see some frescos and …… read more

In the center of Sirmione there is Santa Maria Maggiore Cgurch, built in ‘400 with pieces of the old church and the nearby cemetery , inside there are frescoes and a wooden statue of the Madonna of 1400 , has a front porchof 1500 with columns of 361 AD …… read more

it was built on a previous pagan temple, is located on the hill near the Catullo Caves, originally from the Longobard period, retains many elements that are very old, some frescoes and the bell tower of the eleventh century …… read more 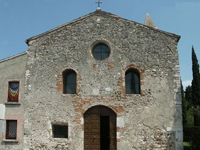